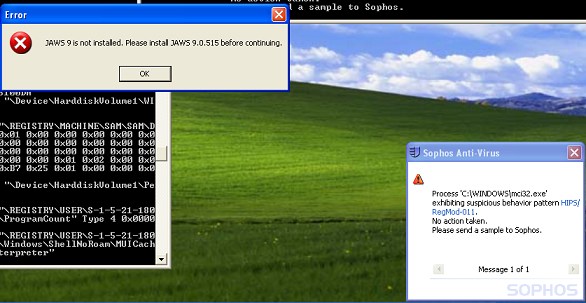 While I was investigating reports of the Troj/Mbroot-A Master Boot Record rootkit I decided to follow up on a suggestion seen on a mailing list. It was suggested that an incident described on ZoneBBS forum may be related to the MBR trojan I was initially looking for.

The thread contains a number of posts submitted by several very distressed forum members. According to their reports, they have been unable to use their Windows computers since Boxing Day. The news itself would not be very interesting if the forum members complaining about these incidents were not blind. Their computers were rendered unusable because the software used to read the screen text and convert it to speech suddenly stopped working. An interesting thing was that not all users were using the same screen reader software.

I was quite keen to help, but the users had already managed to pinpoint the culprit. It was a fake crack for JAWS 9.0 screen reader software, one of the most popular screen readers. Allegedly, the crack did not just patch the JAWS executables to allow them to run without a legitimate licence, but it also installed a Trojan targeting JAWS and other popular screen readers.

Thanks to Ryan Smith, a developer of accessible games who also created a tool to help the users prevent the Trojan, I have managed to get the offending file. When I run it through our automated analysis system I could immediately see that the patch installs more than one would hope for. Three additional files were installed, two executables – mci32.exe in Windows and svchost.exe in the Windows\Config folder. Furthermore, there was a DLL named securityService.dll in the System folder. Suspicious registry activity triggered the detection in the HIPS portion of Sophos Anti-Virus 7. The dropped DLL was also registered with Winlogon process so that the malicious code was loaded early during the logon process.

I started the disassembly with interest. It soon became clear that this was a very unusual and well-executed attack targeting blind people. The attention to detail and the programming style implies that the attacker was skilled, possibly a professional programmer.

As with some other advanced malware, the Trojan processes are protected by each other. The securityService.dll is protecting svchost.exe so it can not be terminated using standard tools such as Task Manager and svchost shields mci32.exe from deletion. This is a protection chain similar to the one seen in some earlier variants of Troj/Zlob. Furthermore, the securityService.dll registered a handler function which will get notified if the Registry key “HKLM\SOFTWARE\Microsoft\Windows NT\CurrentVersion\Winlogon\Notify\securityService” is changed and restore its previous values.

In other words, the removal of this beast is quite difficult, even if the person cleaning up the system was not blind. The best thing would be to reboot the system from a clean bootable media and remove all offending files, but that may be out of the question since the accessibility features in most Linux bootable CD distributions are not very good. The next best thing is to install an anti-virus software that can remove the Trojan. Sophos Anti-Virus 7 detects it as Troj/KillJWS-A and it can successfully remove the Trojan.

Next thing I wanted to check was the payload. If the discussion on ZoneBBS was correct, the Trojan would prevent screen readers from working on 26 December 2007. I started looking for the time comparison and it did not take too long to find this code snippet: The payload trigger time is compared with the current system time converted to the number of seconds expired since 1 January 1970. When converted to system time, the long value used for comparison is exactly 26 December 2007 at 0:00 and the payload will be launched if the current system time is later than the trigger time. The payload is relatively simple. The payload function enumerates all processes and compares the names of the running processes with a list of processes containing several well known text-to-speech programs such as Jaws, Windows Eyes, Microsoft Narrator, HAL Screen Reader and Kurzweil.

Overall, this attack left me questioning the attacker’s morality as it is really difficult to imagine what would be the motivation for an attack like this one. The attack does not seem to be financially motivated, although one may think that the intention was to “punish” people using illegal copies of JAWS software. All this makes me think that long prison sentences for malware writers conducting attacks such as this one are not harsh as I used to believe.