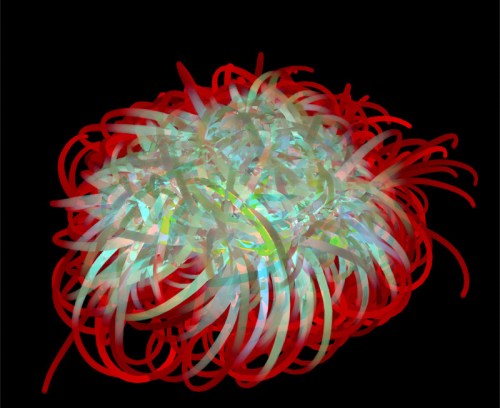 Combining engineering and art often results in interesting concepts, though using computer viruses as objects of art is relatively rare. The project Contagious Paranoia from Venice Biennale in 2001 was frowned upon by the anti-virus industry. Now, a new computer virus “art” is created and I still have not decided how to react. The l33t sounding work “Malwarez” is a set of images of popular computer viruses as imagined by Romanian digital artist Alex Dragulescu who’s other work include digital image series such as Spam architecture and Spam plants, like this one for example: The artist has used malware disassembly and the relationship of system calls and memory references to create visual art representing popular samples such as W32/Dorf or W32/MyDoom. For me, the most interesting image is certainly the one representing Virutmytob. I never would have imagined that a cross-infection of W32/Virut and W32/Mytob would be distinctively green, like a very strange cactus.

The other images in the series, commissioned by MessageLabs, are appealing in a similarly weird way, though I wonder if this is because I know these samples quite well. I admit I have been guilty of thinking about certain malware families as having a life of their own, not connecting them with their developers and their malicious intentions.

On the other hand, computer viruses are just programs as any others and Dragulescu’s art would not look much different if it represented Microsoft Word, Acrobat Reader or Sophos Anti-Virus. Of course, using legitimate software as an object of art would not be as exciting or newsworthy as using computer viruses or spam, especially if the art is to appeal to non-technical audience often disappointed by the ordinary look of “plain” malware disassembly. For me, the main purpose of art it to stir emotions and to make me think. As such, “Malwarez” series succeeds, though a nicely commented “plain” malware disassembly in IDA Pro often has the same effect on me. But, is it art?