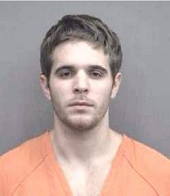 Yesterday, Sophos published a story about a 47-year-old Cypriot man who has been jailed for four years after being found guilty of spying on a young woman via her webcam. Having infected her laptop with a spyware Trojan horse the man took illicit pictures of the 17-year-old girl in her bedroom, and then tried to blackmail her into posing naked for him.

We’ve seen similar cases in the past, and it’s pretty sick to hear that they are still occurring. Indeed, today we hear of a similar tale from the United States.

According to The Gainesville Sun, a 23-year-old man has been arrested for allegedly taking more than 20,000 photographs of a young woman in various stages of undress, without her knowledge.

Ironically, the intrusion is said to have taken place after the young woman took her laptop to a technician for repair – only to find afterwards that it’s battery life was draining, and that the webcam’s activity light kept switching on.

The charged man has been named as Craig Matthew Feigin – he’s the guy wearing orange pyjamas in the picture. (I wonder if he knew he was having his photograph taken?)

According to detectives working on the case, spying software found on the victim’s laptop is available on a website connected with Feigin, and is marketed as a tool for catching philandering spouses and drunken babysitters.

So, if your webcam light flicks on unexpectedly, maybe it’s time you scanned your PC with an up-to-date anti-virus?

As I’ve said before, though, I don’t really understand why this kind of crime occurs.

Let me say this loud and clear: if you want to look at naked pictures of women there are plenty of places on the internet where you can do this for free. You don’t have to infect innocent people’s computers and take over their webcams. What’s more, the quality is likely to be much better than the grainy resolution served up by most web cameras.

3 comments on “Another man accused of “Peeping Tom” webcam hack”