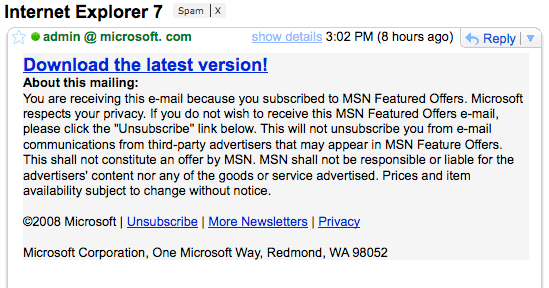 In the past week or so we’ve seen Britney and Paris having fun together, CNN headlines of Michael Jackson being sued by his pet dog, and not to mention the numerous XXX-rated pictures of Angelina Jolie.

So, what do the bad guys do now?

Well, they’re not offering pictures of the hottest new starlet, or even breaking news from the Olympic Games (although that surely isn’t too far away..). No, they’re urging us to download a program that has been free to download from Microsoft’s website since October 2006. As with earlier attacks, the actual link points to an executable file (detected by Sophos as Troj/FakeAle-EF), and the email was most certainly not sent by Microsoft. You would be very unwise to download and install it. If you want IE7, go to Microsoft’s website instead.