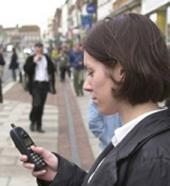 Although we have been waiting almost ten years now for the dire predictions of some security companies to come true about the tidalwave of mobile malware waiting for us “real soon now”, there are still the occasional sightings of new malicious code which affects mobile phones.

These new mobile phone viruses are treated as something of a curiousity inside our labs, and analysts who normally spend all day examining mostly Windows-related malware may view it as a nice distraction from the run-of-the-mill malicious code.

The latest example to arrive in SophosLabs is Troj/Konov-A, a Trojan horse that doles out SMS text messages to premium rate numbers (thus, apparently generating revenue for the perpetrators).

That means that the Trojan, which appears to originate from Russia, also costs the user money of course.

It’s apparent that Konov isn’t the first piece of malware to try such a trick. For instance, in March 2006 the Redbrow Trojan horse attempted to perpetrate a similar ruse but according to our friends at Moscow-based security company Kaspersky, Konov is also being spread via social networking websites like Vkontakte (a Russian Facebook-lookalike).

By the way, there is a significant security problem on mobile phones – but it isn’t primarily the malware issue. Although phone users (especially smartphone owners) should exercise caution over which programs they install, and what links they click on, from their device, the main security issue with phones is that users lose them. They leave them on trains, they slip down the back of cinema seats, or they get stolen while you’re in Starbucks.

If your phone is carrying information that might be useful to a criminal (and more and more of them do exactly that) then you best make sure that the information is properly secured behind a password and strong encryption, or potentially face the consequences.