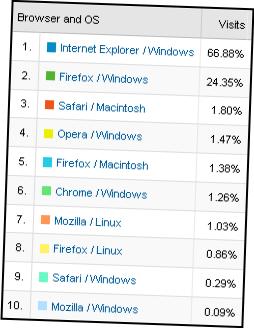 If you’re anything like me then you’ll have a favourite browser that you use most of the time. Even if you have more than one installed on your desktop, my bet is that there’s one you use in preference and that your finger naturally clicks on rather than another.

With web threats such as sites infected with malware and bogus webpages designed to phish your identity so commonplace, it’s interesting to find out which browsers people are using when they surf the web.

So every now and then I’m curious to learn what browsers people are using when they visit the Sophos website. I asked James one of our web wizards to produce a report for me on browsers visiting our site in the last week, and this is what he found: As expected, Microsoft’s Internet Explorer rules the roost, but Mozilla Firefox has a not-to-be-sniffed-at 24.35%. This almost quarter share of the market is pretty impressive in my eyes, but I wonder if it’s been slanted by the kind of people we have visiting our site (typically IT-literate people into technology and with an interest in security), who probably know that there is more than one way of browsing the internet.

Google Chrome, which first bobbed up in beta form at the start of September, is still getting a respectable number of regular users. It’s not showing any signs of growth, but then if you’re security-conscious are you really going to be regularly relying on a beta version of your browser?

But what really caught my eye was Safari’s performance (or rather lack of it).

Safari is the default browser shipped with Apple iMacs, MacBooks and is built into the iPhone. Apple announced this week that its Mac sales are at an all-time high, and that the market performance of the 3G iPhone is “spectacular”, so why is Safari’s marketshare so weak?

Despite Apple’s attempts to get more Windows users to run Safari, the browser is barely alive on that platform. Meanwhile, on the Mac OS X platform (Apple’s home turf, remember) almost as many people have chosen to install and run Firefox as have stuck with the default installation of Safari.

Combined with reports that popular websites such as PayPal may be recommending users don’t rely on Safari for their online security, this doesn’t bode well for Apple’s slice of the internet browsing pie.