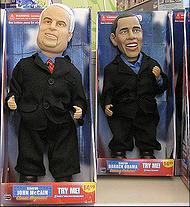 Last week the spammers told us that John McCain had caught nude in public, discovered that his wife Cindy had starred in a private video and (presumably from the shock and stress) died from a heart attack.

The latest news from the spammers is that Michelle Obama has been caught nude and drunk in bed, and that her husband is on the verge of death. Oh, and apparently it wasn’t a heart attack that killed John McCain, but a car crash.

Here are some of the subject lines that the criminals are using at the moment to try and tempt you into viewing their pharmaceutical spam:

It seems they have learnt to spell John McCain’s surname properly now. How long until they get the President Elect’s first name correct too?