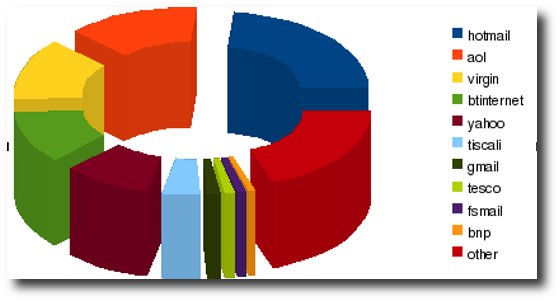 As we have been saying on our blog recently spam volumes have been down for some. Others may be seeing an increase in spam though, especially for those individuals and companies whose contact details were published to various internet sites last week as part of the leak of BNP party membership lists. In the chart I have tried to amalgamate addresses into groups e.g. Virgin = {Virgin, Ntlworld, blueyonder} etc. This was based on the first part of the domain.

Rumour has it that the person(s) who leaked this information added some details spuriously.

The email addresses listed will undoubtedly be added to spammers lists of email addresses. Those mentioned in the list should look to upgrade their anti-spam software, then again this is the least of their worries.