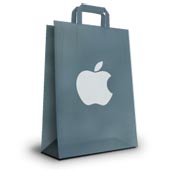 I’ve been sick for a day or two. One of the drawbacks of being tucked up in bed with a fever is that my wireless signal doesn’t quite make it that far up the stairs – and so the blog can be interrupted and emails left unanswered.

Anyroad, in case you missed it check out Vanja’s post on the SophosLabs blog about a new example of Apple Mac OS X malware that we have encountered.

In many ways the malware, which Sophos detects as OSX/Jahlav-A, is very similar to the RSPlug financially-motivated malware that we first saw this time last year.

Like other malware campaigns engineered by this particular gang, a bogus webpage is created claiming to contain a video. Visiting the site produces a message saying that you don’t have the correct codec installed to watch the video – whereupon the site offers you an EXE if you run Windows, and a DMG (Disk Image) file if you are using an Apple Mac.

Of course, installing the code is a very bad idea – whichever operating system you use.

Coincidentally, news of this latest piece of Mac OS X malware follows close on the heels of the computer vendor publishing a support advisory underlining the importance of all Apple users to run anti-virus software.