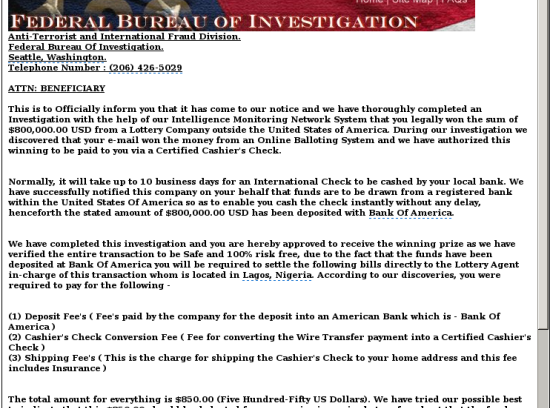 On this relatively quiet Christmas day, I got a chance to examine some of the messages that came to our spamtraps. I was searching for Christmas/new year related Nigerian scams, and I came across something else quite strange, which is Federal Bureau of Investigation (FBI)-themed Nigerian scams.

The FBI would never give out atm cards full of cash, or if they do, they would probably not give out the money from a Nigerian bank. I wonder if the scammers had thought this all through before sending out these scams. I managed to find three different messages that we have received in the past few days.

First up is a nicely put together message that even has a FBI banner at the top and a NSB seal at the bottom: I am quite sure that the “Intelligence Monitoring System”, if it exists, does not help verify if people won a sum of money. Of all the FBI-themed scams I’m showing today, the scammers in this one is by far the greediest. They are asking for an advance-fee for $850 – quite a hefty sum. Of course, if a person has parted with his/her money to these scammers, they’ll never see it again. Definitely not “Safe and 100% risk free”.

Second message is a promise for an “ATM card with lots of money”: This second message also mentions the “Intelligence Monitoring System” but the message body is different. It seems that the scammers could not make up their mind on the content of the message and ended up contradicting themselves. In the first paragraph, the message first claims that the recipient is getting defrauded by imposters. Later on in the paragraph, it says that the payment has not been received because “you have not fulfilled your Financial oblication give to you in respect of your Contract/Inheritance Payment”. So which scenario is it? A fraudster or a missing fee? Even though the “total payment” of the scam is also $800,000 US dollars, the amount of advanced fee asked for in this message is only $150. Perhaps a nicer looking scam message has a bigger price tag?

The third FBI-themed Nigerian scam is just as convoluted as the other two: In this third scam, the payment value has been raised to $10,700,000, more than ten times increase in value compared to the other two messages. This time they did not list the value of the advance fee. Once again, the scammers claim that the payment is “100% genuine and hitch free”. The strangest part of this scam message is the title of the supposed report which is “FEDERAL BUREAU OF INVESTIGATION SEEKING TO WIRETAP THE INTERNET”. I have no idea what that has to do with the rest of the message.

After reading through the three messages, it strikes me that the messages may all originate from the same source. Whether the messages themselves seem convincing or not, I hope no one fell for these scam especially during the holidays. Hopefully, with more awareness of these scams, they would disappear and become a thing of the past. At least one could wish for that in the new year.

One comment on “Nigerian 419/advance fee scams: the FBI edition”