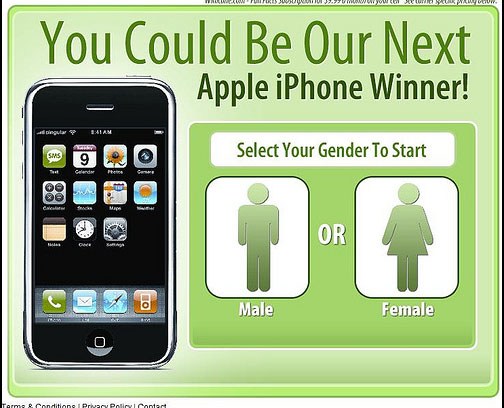 The phishing campaign which spread over the weekend via Twitter, stealing users account details has evolved into a series of new campaigns.

Many Twitter users are reporting that they have been struck this morning with a barrage of new direct messages such as:

Wanna win the new iPhone? It's so easy and cool, I love this thing! Visit: [url removed]

Clicking on the links can take users to a website that claims that they might win an Apple iPhone if they hand over their credentials including their cell phone number. It is possible the spammers are earning a commission via affiliate links by directing traffic to these websites. Even Twitter celebrities such as Stephen Fry (perhaps not surprising considering how many followers he has) have reported clicking on links from the earlier phishing campaigns without thinking of the possible consequences.

With typical wit the self-confessed gadget freak Fry admits that another Apple iPhone is the last thing he needs.

The good news is that because Twitter celebs like Stephen Fry have so many followers they can help spread warnings to other members of the Twitter community about phishing campaigns very quickly. On the other side of the coin, however, if their accounts were ever compromised the spammers would believe that they have hit the mother lode. After all, a link in a message from someone famous might be very hard for many people to resist..

Twitter is obviously concerned about the phishing and spam problem, and has added a warning on its site.

However, the constant stream of reports suggests that there are still a sizeable number of Twitter users who do not realise that their accounts have been compromised.