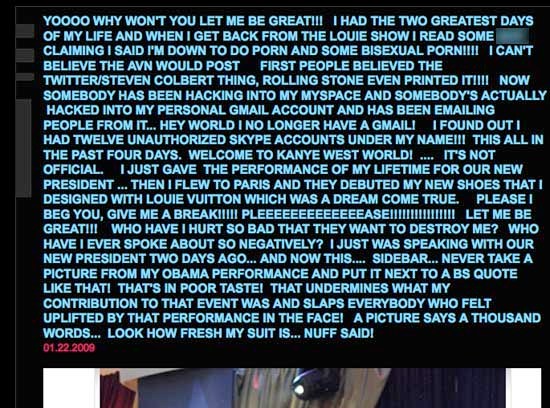 Someone has really got it in for award-winning American rapper Kanye West.

In December he was embroiled in a war-of-words with Stephen Colbert, after offensive messages were allegedly posted on the singer’s Twitter account criticising the Comedy Central host.

The hostilities between the two were only dampened when West denied that the Twitter account belonged to him, and claimed that he was being impersonated online. In addition to the attacks on his Gmail, MySpace, and Twitter accounts, West also claims that he has discovered 12 Skype accounts using his name.

Everyone who has an online presence needs to take great care to ensure that their accounts are not compromised, and their passwords are not guessed. Unfortunately celebrities, however glamorous their wardrobe, are just as human as the rest of us – and just as likely to be make a foolish mistake when it comes to properly securing their online accounts.

We’ve seen famous people such as Britney Spears, Nicolas Sarkozy and Sarah Palin have their accounts compromised in the past, and no doubt we’ll see more in the future.

I wonder if Kanye followed our simple tips for more secure web passwords?