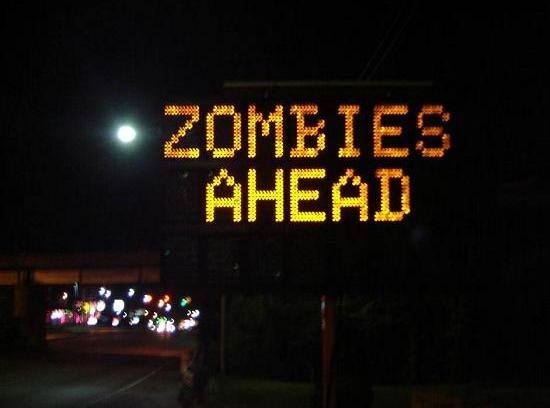 Normally when I am writing about zombies and hackers I’m discussing the threat of cybercriminals commandeering innocent people’s PCs to turn them into a spam-spewing botnet.

This one is a bit different however.

As reported by Fox News, hackers in Austin, Texas, hackers took advantage of the electronic roadside signs to display a message perhaps inspired by a George A Romero film – “Zombies Ahead”. Joking aside, hacks like this are illegal. No doubt the authorities are looking closely at the nearby University of Texas to see if the pranksters might have planned their hack from there.

According to Sara Hartley, a spokeswoman for Austin Public Works, the sign was returned to its original message within hours. The organisation insists that the sign was equipped with external locks, and that the hackers had to physically break in to change the message.

Although the messages on roadside signs like this are supposed to be properly secured with a password, there is speculation that many workers leave them with their default settings. As many of us in the computer security world know, sticking with a default password is never a good idea.