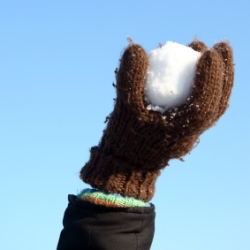 Enough snow fell in the UK on Monday for everybody to make 251,800 snowballs.. each.

That’s the calculation of maths wizard and national sweetheart Carol Vorderman, who reckons that Britain saw a mind-boggling 3,840 billion kilograms of snow on 2 February.

Sophos’s HQ in Abingdon, near Oxford, escaped most of the snow that day, but last night it fell in droves covering our rather swanky offices.

And that’s why Gareth in our virus analysis labs (you’ll see him hard at work in the video above) has organised a company-wide snowball fight on the grassy knoll outside Sophos. The snowball fight starts at 1pm – please be sure not to cross over into the roads (it’s a bit hard to tell where the once-grassy knoll ends and the roads begin).

And if anyone from Kaspersky’s UK offices (which aren’t based that far away from us, and should be no strangers to snow given their Russian heritage) wants to join us in the snowball fight to find out who is the toughest anti-virus company… BRING. IT. ON.