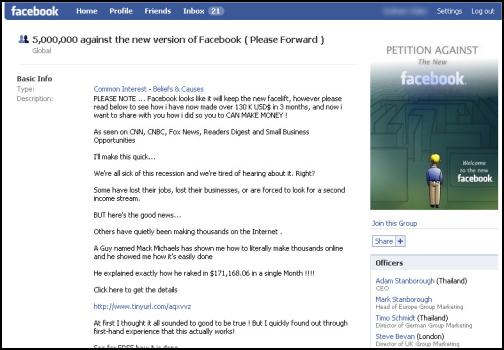 A Facebook group of 1.5 million computer users set up with the apparent intention of collecting five million people against the site’s revamped user interface has been commandeered by “Make Money Fast” spammers, who have plastered its Facebook page with adverts.

The group, entitled “5,000,000 against the new version of Facebook”, was the subject of newspaper headlines last year after it was discovered that it was gaining up to 200,000 new members every day as users protested against an unpopular new interface that Facebook had rolled-out for its users.

At the time of writing, although the group appears to have failed in its intention to persuade Facebook to revert to its previous look-and-feel, the group still has 1,519,704 members. However, its nature has changed – with it now being used as a platform to push get-rich-quick schemes to the unwary. (Click on the image above for a larger version of the graphic).

The description of the group on its main page now reads:

PLEASE NOTE ... Facebook looks like it will keep the new facelift, however please read below to see how i have now made over 130 K USD$ in 3 months, and now i want to share with you how i did so you to CAN MAKE MONEY !

We're all sick of this recession and we're tired of hearing about it. Right?

Some have lost their jobs, lost their businesses, or are forced to look for a second income stream.

BUT here's the good news...

Others have quietly been making thousands on the Internet .

The page then goes on to list a TinyURL redirector that takes curious clickers to a website:

A variety of other products are spamvertised to the Facebook group’s 1.5 million users, including an advert for a guide on how to seduce women:

What’s going on with this Facebook group isn’t entirely clear. Did the group’s founder, Adam Stanborough, set up the page in the first place with the intention of gathering a huge audience to advertise money-making schemes, was he surprised by the group’s massive success and decide belatedly to take advantage of it, or is he an innocent victim and had his account stolen from him by a hacker?

What is clear, however, is that spammers are leaving marketing messages and web links strewn across the Facebook group like the graffiti left by teenagers in an abandoned house.

If you’re on Facebook, maybe now would be a good time to return to some of the groups you may have joined long ago and don’t visit anymore, and decide if you want to permanently cut your ties before squatting spammers take control.

Credit where credit’s due: Thanks to Clu-blog reader Jack (who hangs out as @ThePickards on Twitter, and writes an entertaining blog) for tipping me off about this.