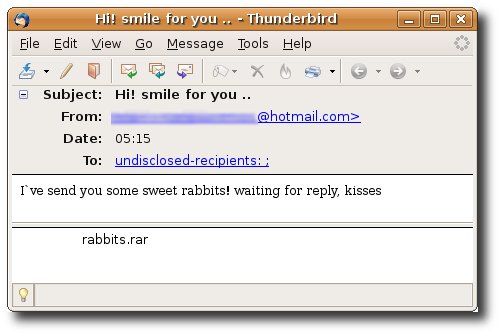 Since earlier on today, we have been seeing an ongoing phishing attack against PayPal, and not the usual phishing email enticing the victim to click on a rogue site. Instead, the attackers have spammed out malware within a RAR attachment, using the filename rabbits.rar. A variety of other subject lines and message bodies have been seen as well.

Anyone opening the attached archive will be greeted with malware (rabbits.exe) that once executed will:

The malicious VB script is a simple Trojan, overwriting the contents of the HOSTS file in order to redirect PayPal related domains to a specific IP address. Detection for this malware (executable spammed out and the VB script) was included in the alert earlier on today as Troj/Agent-IYU.

To my mind, the social engineering behind this one seems rather obscure. Then again, perhaps there are more rabbit fanciers out there than I imagine…