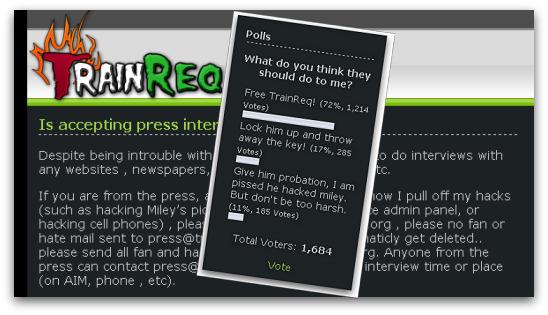 The 19-year-old hacker who was raided last October for allegedly breaking into Miley Cyrus’s MySpace account and stealing candid photographs of the teenage singer, also hacking into the accounts of other stars according to the FBI.

According to an affidavit obtained by NewsChannel 5, Miley Cyrus was not the only victim of Tennessee teenager Josh Holly who used the online nickname “Trainreq”.

Wired magazine reports that music stars such as Rihanna, Chris Brown, Linkin Park and Fall Out Boy had their MySpace accounts compromised, with Holly spamming fans messages about where they could download ringtones for their favourite artists. Advertising affiliates are said to have paid Holly between $5 and $12 for every person who responded to the adverts.

According to the documents, Holly received $110,000 from the scheme between November 2007 and July 2008, although he claims that half of the money went to an Israeli-based accomplice.

Meanwhile, Holly is still running his Trainreq website, seemingly courting attention from the media, where he is even running a poll asking people what punishment visitors think he should receive: