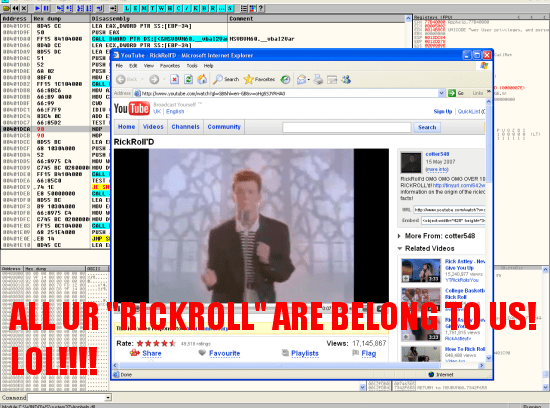 Do you like internet fads that are so far past their sell-by date they’re starting to whiff a bit? Do you consider 4chan to be the pinnacle of internet humour? Annoyed that your tastes aren’t reflected in the current crop of prevalent malware? Worry no more!

Today we received a sample of Troj/Giveup-A, a tiny Visual Basic program that does little more than open a new Internet Explorer window to the YouTube rickroll video every ten minutes. Often we’d let this kind of thing get away with a slightly less serious prefix of Joke/ rather than Troj/ but there were a few of things to consider with this particular program that swung the balance over in favour of calling it malware:

So, you might ask, who is responsible for this creation? Who are these giants pushing the boundaries of humour in a way not seen since Andy Kaufman wrestled a woman to the ground on TV? Luckily for us, these heroes — no doubt soon to become cultural icons — have left us a clue in the program’s version information.

Mystery solved (for us at least; you’ll have to guess).