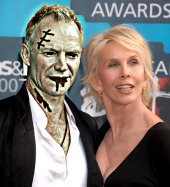 Gary McKinnon, the hacker who allegedly hacked into networks belonging to the US Army, US Navy, US Air Force, Department of Defense and NASA, may have been denied a UK trial, but he has a celebrity supporter in his fight against extradition to America.

Lute-playing, Amazon forest-saving, singer-songwriting pop superstar Sting has told The Mail on Sunday newspaper that he and his wife Trudie Styler have written to the British Home Secretary about the case.

Sting is quoted by the newspaper as saying “It’s a travesty of human rights that Gary McKinnon finds himself in this dreadful situation.. The US response in relation to the true nature of Gary’s crime is disproportionate in the extreme. Gary is even contemplating suicide because of his fear of incarceration as a terrorist in a US jail.. The British Government is prepared to hand over this vulnerable man without reviewing the evidence.”

And Sting is in good company. A poll I’ve been running on this blog for the last few days currently finds 67% of those surveyed in agreement with the former front man of The Police, that McKinnon should not be extradited.

Clu-blog readers will remember that last year I reported how musicians including the keyboardist from progressive rock group Marillion were hoping to stage a benefit concert to raise awareness of McKinnon’s plight.

McKinnon fancies himself as a bit of a singer-songwriter too, judging by one of his videos on YouTube: