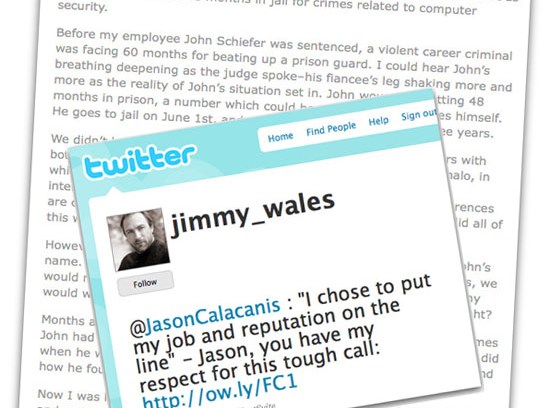 A 27-year old man from Los Angeles who admitted infecting a quarter of a million computers with malware and stealing the identities and bank account details of thousands, has been sentenced to four years in jail.

John Schiefer pleaded guilty to charges of fraud and wiretapping, after he used a botnet (also known as a zombie network) of computers to commit his crimes.

Schiefer, who used the online handle “Acidstorm”, and his accomplices are said to have used the malware to secretly log the usernames and passwords of innocent computer users visiting sites like PayPal. Having stolen PayPal usernames and passwords, Schiefer and other gang members, made purchases from unwitting victims’ accounts.

What is bringing this case additional attention is an emotional blog posting by Schiefer’s boss, Jason Calacanis, the CEO of search firm Mahalo, who hired Schiefer as a security consultant a few months ago.

The fact is that a simple internet search by the staff of Mahalo would have found reports (such as this one on the Sophos website) of Schiefer’s conviction for botnet crimes.

However, although Mahalo claims to have a rigorous hiring process and say they check between three and five references for each prospective new employee, they didn’t Google John Schiefer’s name.

Jimmy Wales of Wikipedia fame is one of the people who has expressed sympathy to Calacanis. You can read more about how Mahalo decided to allow Schiefer to continue to have access to their sensitive systems, months after they knew of his crimes, in this article by The Register.

It certainly wouldn’t be surprising if some of Mahalo’s customer raised an eyebrow at this curious state of affairs.

My advice? If you’re hiring a member of staff in a security position, do your checks thoroughly. Don’t limit your background check to just following up references – Google them as well. You don’t know what extra information you may discover, that they have chosen not to share with you at the interview.