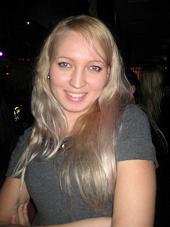 Regular readers of the Clu-blog will know that recently I have been receiving a number of invitations from Eastern European women hoping to make friends with me.

Natalya and Oksana didn’t tell me how old they were, but from their photographs they look like they could be in their twenties. Evgeniya was more helpful, telling me she was 28 years old – which is probably still a bit young for me these days.

Now I’ve been contacted by Elena, a 27-year-old blonde, from some mystery land far away. None of the women have been forthcoming in revealing where in the world they are based, but I’m assuming Russia.

Much as I would love to imagine it were true, I somehow think it’s unlikely that they’ve all suddenly taken a shine to hitching up with a computer security dude.

Scams like this rely on tricking someone vulnerable into responding. It’s sad to imagine, but there are people out there who are so desperately unhappy or disadvantaged that rationality has flown out of the window, and who might genuinely believe that someone they have never heard of before has decided to email them out of the blue with the offer of a relationship.

In the old days, people like this were protected by the community around them – their friends and family could keep an eye on them to try and stop them getting into trouble. But now, with the internet, it’s all too easy for scammers to prey on the elderly, the confused, the desperate and the vulnerable to make a quick buck out of them without caring eyes noticing what’s going on.