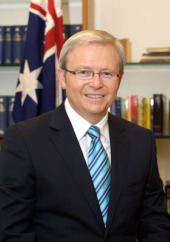 Australian media reports are claiming that Prime Minister Kevin Rudd has been the target of a stream of attacks from Chinese hackers.

According to a report in The Australian, hackers attempted to break into laptops and mobile phone communications during Rudd’s visit to China in August last year.

In addition, the report says that intelligence sources claim that the authorities in Beijing made repeated attempts to break into Australian government and business networks, as well as foreign embassies based in Australia’s capital city, Canberra.

Coincidentally, Rudd served as a diplomat in Beijing and speaks Mandarin. As such it’s perhaps slightly more likely that he would have contacts and associates inside China who may communicate regularly with him – and it wouldn’t be outrageous to speculate that these could have been the vector for an attempted hack.

It seems to be becoming more and more common for China to be singled out for state-sponsored cyber-espionage (see the recent discussion about GhostNet, for instance), but what is still lacking is any evidence proving that the attempted hacks are endorsed by the Chinese government or military rather than the work of independent hackers.

Furthermore, proving the origin of a hack attack is made even more complicated by the fact that cybercriminals can use compromised PCs owned by innocent people to act as a go-between when trying to break into someone’s computer. In other words – yes, a Chinese computer might have tried to connect to yours, but it may be under the control of someone in, say, India.