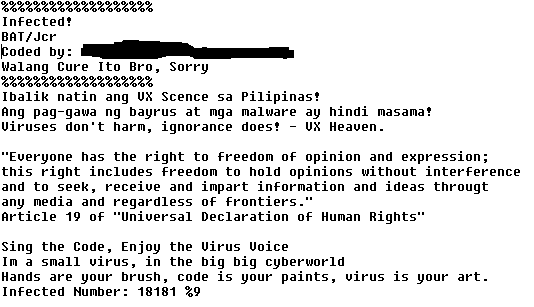 Gone are the days when viruses were constructed to show off an author’s coding prowess and ego, though we do still receive the odd samples which appear to adhere to this oldskool ethos.

One such recent sample was a Batch script (claiming to be a virus demonstrating a new technique, but really acting as nothing more than the most basic worm) purportedly created by a 13 year old from the Philippines. The worm attempts to copy itself using the names of common folders and media files in the typical locations of “Desktop”, “My Documents”, “My Pictures” and “My Videos” to increase its chances of being inadvertently started by the unsuspecting user.

The worm also tries to delete everything from the users Desktop – not something any admirer of skill would appreciate!

After completing the “installation/infection” stage, the worm drops a text file onto the Desktop announcing itself to the user (as if the missing files weren’t an obvious indication of something gone amiss) with a greeting, a few political statements and an artistic schpiel all destined for MissPiggy. Obviously this youngster hasn’t been keeping up with current affairs to notice that malware authors no longer get job offers or prestige (except in New Zealand), instead they get prison sentences! Aiding the authorities, he’s left his nick (locatable by Google) to aid the authorities in tracking him down. I guess this malware author is just another muppet. Restecp.