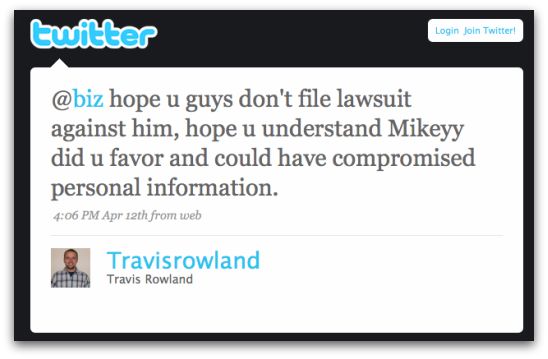 Mikeyy Mooney, the 17-year old hacker who caused mayhem on Twitter with a series of worms on the micro-blogging website last weekend, has been rewarded with a job in web applications development according to media reports.

Frankly, the news that exqSoft Solutions has approached and hired Mikeyy Mooney, the teenager behind the StalkDaily and Mikeyy worm attacks, has really got my goat.

What did Mikeyy actually achieve with his worms? Okay, so he proved that there was a problem with Twitter. But the other thing he showed was that was irresponsible.

If you find a flaw in a piece of software or website, you don’t write a worm to exploit it impacting thousands of innocent users. Instead, you should act responsibly and inform the affected company instead, and work with them to get the problem fixed.

Mikeyy Mooney may be skilled in some areas of computing, but there are many other talented people out there who have never shown such a disregard for established and accepted ways of reporting security flaws, and haven’t shown such questionable judgement.

Mikeyy could have gained so much kudos, and proven that he was a responsible security researcher if he had acted more maturely.

Travis Rowland, the CEO and founder of exqSoft Solutions (by the way, I really have a problem with firms who insist on spelling their name with a lower case letter.. what’s up with that?) had previously posted a public message to Twitter founder Biz Stone, asking that legal action should not be taken against the young hacker: Judging by other messages posted by Rowland, his hiring of Mikeyy Mooney is being used at the moment as a publicity stunt, and has got it some cheap exposure in the press:

But lets think about this. ExqSoft Solutions are in effect encouraging other youngsters to behave like irresponsible idiots. The last thing we want is a wave of other kids exploiting software and websites, in the hope that they might be rewarded with a job offer.

Thanks for nothing ExqSoft Solutions.

Of course, Mikeyy Mooney isn’t the first malware author to be offered a job after publicising their “skills” with an attack.

For instance, the author of the Anna Kournikova worm was told by his town’s mayor that he would be welcome to work on their systems, the notorious teenager behind the Sasser and Network worms was hired by a security firm, and the creator of a Chinese worm which displayed pictures of pandas burning incense was offered a job by one of his victims.