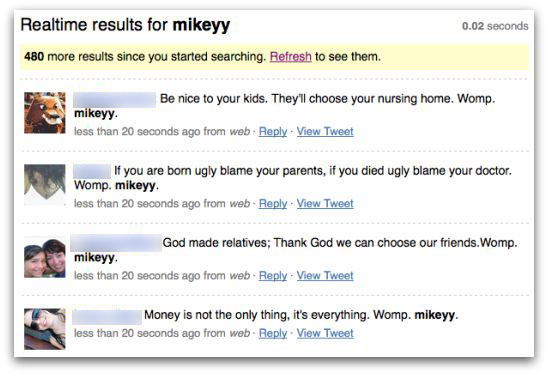 Another day, another Twitter worm. After yesterday’s attack referencing the likes of Ashton Kutcher and Oprah Winfrey we are now seeing many Twitter users spreading messages on behalf of a new version of the Mikeyy worm, this time their common denominator is that they’re all jokes including the (somewhat bizarre) word “womp”. Here are some of the messages that are being sent from compromised accounts on Twitter right now:

Once again, Twitter is left looking amateurish in its response as it clearly hasn’t properly hardened its systems from these kind of cross-site scripting attacks. Until they get their act together, users need to remember to turn off scripting (the combination of Firefox and NoScript is a good one) if viewing users’ profiles.

One thing’s for sure, this just isn’t funny.