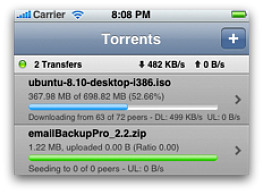 Apple has reportedly rejected an application which would allow users to download material from peer-to-peer (P2P networks) from being listed in its iPhone App Store.

DriveTrain from Maza Digital has been rejected, says Apple, because such application are “often used for the purpose of infringing third-party rights.”

To my mind, Apple is right in saying that – P2P networks are often used for illegal purposes that breach copyrights, but they’re also used for perfectly legitimate reasons.

Of course, it doesn’t take a brain surgeon to realise that if Apple was to allow P2P file-sharing on iPhones it would facilitate the sharing of music and movie files that could harm the success of services like iTunes.

But my understanding is that this isn’t quite what DriveTrain does. Instead it appears that DriveTrain is simply a front-end for PC and Mac clients, allowing you to control P2P downloads on your desktop PC via your iPhone.

File-sharing networks used to be only used by nerds – but increasingly regular computer users are finding them easy-to-use and a simple (although sometimes illegal) way to get hold of the latest TV shows, blockbuster Hollywood movies and hit albums.

Copyright concerns are just one of the reasons we’ve heard from corporate customers wanting to control use of P2P clients on their network. Other worries include overloaded bandwidth, data leakage and malware being distributed via file-sharing networks.

Sophos’s Application Control functionality – which is integrated into Sophos Endpoint Security and Control on Windows computers – puts the power in system administrator’s hands to control who can run file-sharing software, computer games, instant messaging applications, VoIP, and much more else besides.

If Apple’s policy stays firm, it looks like we won’t have to extend that functionality to the iPhone just yet.