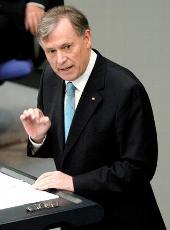 According to newspaper reports, Twitter has been at the centre of a political storm in Germany after news of the president’s re-election leaked out on the micro-blogging website.

"People, you can watch the football in peace. The vote was a success."

Meanwhile, the SPD’s Ulrich Kelber prematurely posted the result on the internet, with even more details:

"The count is confirmed: 613 votes. KÃ¶hler is elected."

Senior members of the Bundestag are said to be concerned that the leaks via Twitter are undermining the dignity of the German parliament, and that fellow politicians should exercise more restraint in their public utterances on the internet.

This isn’t the first time a politican has got themselves into hot water via Twitter, of course. For instance, earlier this year a US Congressman made the mistake of revealing his secret trip to Iraq, potentially putting security at risk.

As services like Twitter spread wider through society we’re likely to see more and more stories of politicians using the internet to share the latest news and their opinions. The question is – will the public be amused or annoyed to see their well-paid representatives Twittering away rather than going about the normal business of government?