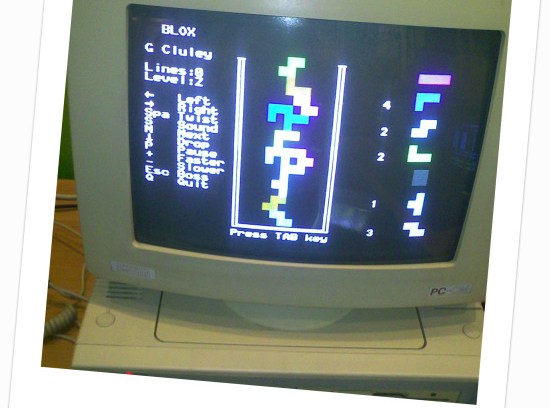 In the late 1980s/early 1990s I was an impoverished student writing computer games for fun and pocket money.

A couple of my text adventure games (Jacaranda Jim and Humbug) did pretty well as shareware, and I also wrote some simple arcade games.

One of those arcade games, called Blox, was a shameless rip-off of Tetris. I had only seen Tetris once at a friend’s house, and wasn’t completely au fait with all of its details (the scoring system for instance), but I realised it was addictive and reckoned I could knock up a simple clone with a couple of days’ effort.

Blox pretty quickly became popular in the college I was studying at, and it wasn’t unusual to find half-a-dozen strangers playing it when I walked into the computer labs. People were particularly keen to play Blox as it had an extraordinarily sophisticated boss key – if a lecturer walked into the labs then just pressing a button would bring up a fake spreadsheet into which you could enter data.

It felt pretty good to see my software being enjoyed by people, and I got a similar buzz when people were later protected by anti-virus software I’d helped to write.

And nearly 20 years later I’m cockahoop to get news from fellow Twitterer KingDaveRa that during a trip to Bletchley Park this weekend, he found Blox being exhibited on an Amstrad 1512 PC in their computer museum. For those who don’t know, and there can’t be many of you, Bletchley Park was where World War II codebreakers managed to break the ciphers used by the German Engima machines. By all accounts, it’s a great day out for anyone interested in computing – and badly needs the public’s support.

I was always meaning to make the trip to this historic site, and to hear that my simple DOS computer game is running on a PC in their museum is a big thrill. There can’t be any excuses now – I’m going to have to go and make a visit to Bletchley Park to see this for myself.