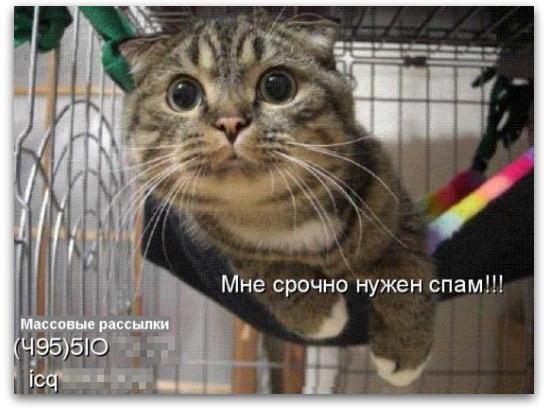 For some reason, one of my non-Sophos email addresses receives a lot of Russian language spam. I’m not sure why, because I don’t speak the language and the address isn’t connected with anything of a Russian nature, but I would guess that it probably receives more spam in Russian than any other language.

Today I received a spam email with a file attached called KotVShoke.GIF: As you can see, it shows a cat up to some semi-airborne shenanigans in a cage.

Dmitry, one of the Russian speakers in our labs, tells me that the message on the image reads “I need spam now! or “Urgent need for spam”, effectively inviting you to contact the spammer via telephone or ICQ. Curiously the phone number – which I have blurred out above – has been obfuscated by the spammers by using characters instead of numbers.

KotVShoke.GIF, by the way, translates as “The Cat Is Shocked.GIF”

So what is this all about? Well, in Russia it’s quite common to receive spam about spam. Spam isn’t illegal over there, and many businesses are either unaware or very relaxed about using spam-methods to promote their businesses – to their mind it’s an acceptable way to attract attention for their company.

So this email of a pussy cat is actually an invitation to hire the services of a spammer.

Here’s a couple of other examples of this Russian spam selling spam services: The first image shows a famous Russian painting of a woman, with the romantic message “Not all men are goats – use spam, find the right one”.

On the right you can see another spam message. This time it shows a car that’s been in an accident (a somewhat sexist joke about it being a young female driver I guess) and a man from the Caucuses region, who buys broken cars, fixes them, and sells them on as new. The title of the spam reads “Find the buyer quickly”, and the man is shown to say “Buy fix, sell. Spam helped a lot. Sold one, bought two. Business sense is in my blood.”

It’s depressing to realise that large chunks of the world continue to have an at least ambivalent attitude to the sending of spam if it helps with business.

While companies continue to think spamming out emails is acceptable, and individuals continue to purchase goods and services advertised via spam, we’re going to carry on having a serious problem with unwanted email.