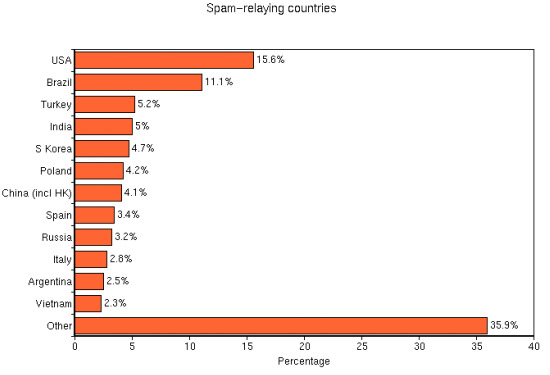 SophosLabs published some research today revealing that one in six spam emails are being relayed from compromised computers (which are part of hacker-controlled botnets) in the United States.

Interestingly China and Russia seem to be sliding down the dirty dozen list, in terms of the proportion of the world’s spam that they are responsible for relaying.

Here are the statistics for April-June 2009: So much attention is given by the-powers-that-be to the threat of cyberterrorists and rogue states launching attacks, but the fact is that it could be your sister-in-law Sandra who is helping the spammers without her knowledge, because her home PC is not properly defended.

And, of course, spam is not the only output from these compromised PCs. They can also be used to spread malware, steal identities and launch distributed denial-of-service attacks – all without the knowledge of the computer owner who doesn’t even realise that their computer is infected.