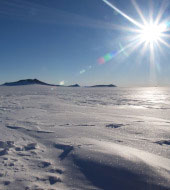 Employees of the United States Antarctic Program (USAP) have been reportedly told that they are not permitted to run peer-to-peer file-sharing programs such as BitTorrent, KaZaa and Limewire.

The reason? USAP’s IT team are concerned that Antarctic workers will swamp the organisation’s expensive and limited bandwidth with multimedia downloads, and may open a door for hackers and malware.

According to a notice distributed by Dennis L Gitt, Information Technology and Communications director at USAP, “P2P applications have the potential to overwhelm the internet connections on the Ice and inadvertently bring malicious software and traffic into the network.”

As part of his explanation, Gitt cited the recent example of how details of Michelle Obama’s safehouse were accidentally leaked via a file-sharing network. In addition to peer-to-peer networks, online gaming has also been banned – so the only Blizzard action the Antarctic employees are likely to see is when they pop out to the loo rather than by playing World of Warcraft.

I guess the system administrators at USAP have a point. It can’t be cheap or easy to connect scientists and workers in the Antarctic to the internet, and the last thing they want is to be (ahem..) snowed under by Christina Aguilera downloads and malicious software planted on P2P networks.

Regular visitors to the Sophos website will probably know that there have been countless incidents of sensitive information leaking into the public domain through peer-to-peer file-sharing software. It seems some still haven’t learnt the lesson.

And there’s also the risk of information accidentally leaking out of the USAP base if file-sharing software is not carefully controlled. A Sophos survey found that 86.5% of system administrators wanted the opportunity to block P2P applications, with 79% indicating that blocking is essential.

By the way, if you enjoy the podcast you can download many more via iTunes or directly from our website.