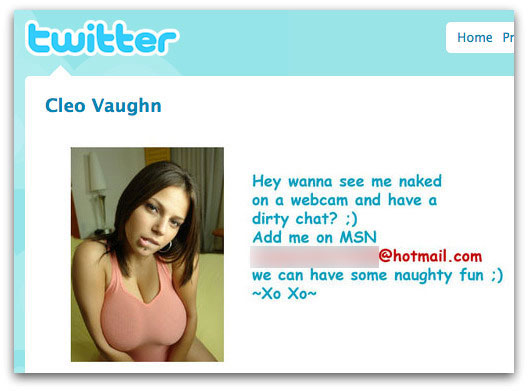 I woke up this morning to find a long list of new people following me on Twitter, and it looks like I wasn’t the only one.

Curiously, all of the followers appeared to have something in common. Spammers have created scores of bogus profiles and followed random users en masse. Each of the profiles comes has a sexy picture of a young woman, complete with a message from the spammer embedded inside the image.

Trust me, the image I’ve included below is much cleaner than many of the other ones being used by the spammers. Some of the photos you definitely wouldn’t want to share with your mother-in-law. The spammers are putting their messages into the image because they know that’s harder for Twitter to identify than if their adverts were presented in plaintext in a regular tweet. This is comparable to a trick we’ve seen email spammers use for some years.

Of course, it’s not a good idea to connect with these spammers by adding them as a friend on MSN. If you were to do so, you could easily be lured into a flirtatious instant messaging chat, which ultimately leads you to an adult website.