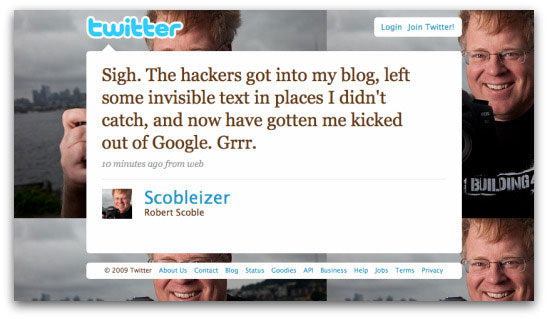 A couple of weeks ago I reported how prominent blogger Robert Scoble, who runs the Scobleizer website, fell foul of cybercriminals who broke into his blog and posted links to pornographic websites.

It seems that Microsoft’s former technical evangelist has good reason to continue to feel hacked off, as he’s just announced on his Twitter feed:

Sigh. The hackers got into my blog, left some invisible text in places I didn't catch, and now have gotten me kicked out of Google. Grrr. It’s not clear if this latest security breach is related to the problem he suffered earlier this month, but it seems likely that he didn’t do a good enough job earlier this month cleaning up his blog, and has been booted off Google’s index as a result. We know from back then that Scoble hadn’t kept his installation of WordPress (the software that runs his and many millions of other blogs on the internet) properly up-to-date.

As Scoble is followed by some 100,000 people on Twitter (many of whom are active bloggers and members of his faithful social media congregation) it would be great if his website was better secured from this kind of incident.

Mind you, at least he’s embraced the Web 2.0 mantra of openness, and isn’t sweeping his security snafus under the carpet.