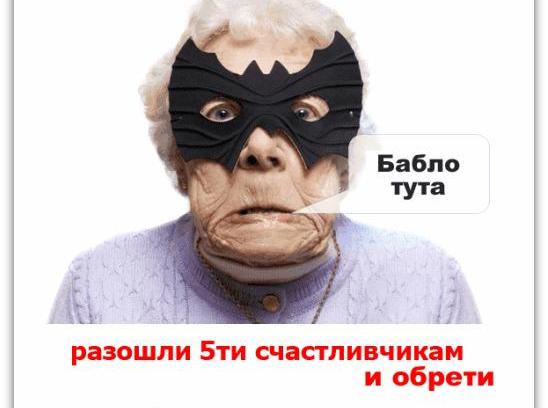 As I’ve mentioned before, one of the email addresses I’ve collected over the years gets a lot of Russian spam.

Here’s an example of a Russian language spam which I received a few days ago: Out of curiousity, I asked Dmitry in our labs if he could translate it into English for me. Here’s what he said:

Red message at the top: "The Grandma of Happiness"

The elderly woman wearing the Batman mask is saying: "The dough (money) is here"

Red message at the bottom: "send this to 5 lucky people and receive" (in biblical sense)

A lot of the spam we see in Russian follows this kind of tactic, offering bulk-mailing services to firms who think it’s an acceptable method of promoting their products and services. And unlike much of the rest of the world, it’s not unusual for Russian spam to include contact details (such as phone number and ICQ information) should a recipient want to get in touch.

Clearly there are a fair number of Russian firms who feel it’s okay to use unsolicited commercial email to market their goods, or these spams offering mass-mailing services wouldn’t be so common.

Clearly the spammers aren’t too careful about ensuring that their messages are only sent to Russian speakers, or it would never have ended up in front of me.