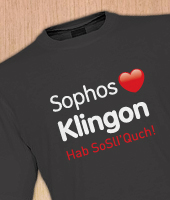 During the course of the experiment we not only found that Helsinki was the Klingon-speaking capital of the world, but also that a surprising number of people chose to keep running the Klingon-language version of our software on their computers, automatically updating against the latest threats just as our software does in English, Spanish, Japanese and other languages.

Update: Some people have been in touch asking why we are discontinuing updates for Klingon Anti-Virus.

I’m afraid that the issue is out of our hands.

A meeting of the Klingon High Council recently expressed concern that the continued existence of Klingon Anti-Virus reflected badly on the Klingon race, as they claim to have eradicated all Qo’noS-related malware, past present and future in both this and mirror universes. And we don’t like to upset them.