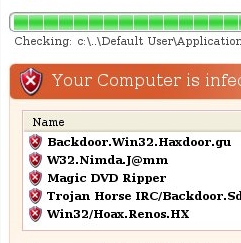 Earlier on today I noticed that the web site for one of the embassies in Paris has been hit by malware. This continues the ‘YAE’ (yet another embassy) series we introduced in previous blogs [2,3].

This current attack provides a classic example of some of the techniques that the rogue AV criminals are using.

Digging deeper on the embassy site it is not surprising they have been hit. The version of the CuteNews CMS application they are using is out of date (v1.4.6 appears to the latest version).

Attackers exploiting CMS applications in order to hit/deface sites is something we have discussed before [4], and I won’t repeat the important security implications that must be considered when using them here.

Fortunately for Sophos users, the redirection script loaded in the SEO pages is pro-actively blocked as Mal/ObfJS-X. The second redirection script that this would load is responsible for redirecting the user to the payload (assuming they came via a search engine). Interestingly, this script also checks the OS, choosing to redirect Linux/Max users to a different site. Detection for the actual fake AV malware installed from this site has been added as Troj/FakeAV-AEA.

I have contacted the admins for the site in question so they can clean up, and secure their site against future attacks.