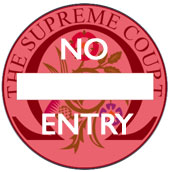 Yesterday, as I was returning from a vacation in Istanbul (I’ll leave stories of my close encounter with a bellydancer and a bout of food poisoning – hopefully unrelated – to another time), I heard of the latest sadly predictable twist in the long running saga of Gary McKinnon’s attempts to avoid extradition to the United States.

The 43-year-old hacker claims that he accessed the computer systems only to hunt for top secret information about anti-gravity propulsion systems and alien technology, which he believed the authorities were hiding from the public.

At the end of July, McKinnon and his supporters lost a judicial review which they hoped would lead to a British investigation into his case, rather than extradition to the USA. Following that setback the team requested the right to appeal to the UK’s new Supreme Court.

Yesterday it was announced that McKinnon will not be allowed to take his appeal against extradition to the UK Supreme Court, because his case is not of “general public importance”.

That decision is likely to disappoint McKinnon’s many supporters, who include members of all the major British political parties, celebrities and 71% of IT professionals we polled earlier this year.

Gary McKinnon’s mother Janis Sharp spoke emotionally on BBC Radio 5 about the impact on her son by the latest decision.