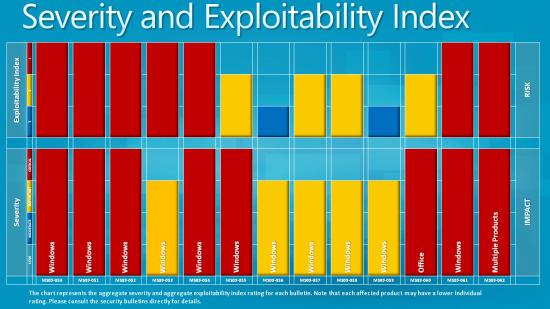 As part of its regular “Patch Tuesday” cycle, Microsoft has released a number of fixes for a number of its widely deployed products to patch critical security vulnerabilities.

A further five of the patches are classified as “important.”

In total, 34 security holes are fixed in what is Microsoft’s largest ever bundle of Patch Tuesday security updates.

Microsoft’s security response center has also released a chart, showing the severity of each vulnerability. “Red” means “critical” – in other words, that’s as bad as thing gets.

So the amount of “red” you see below should be a good indication of how serious these vulnerabilities are. If any more underlining of the importance were necessary, bear in mind that functioning code which exploits some of the vulnerabilities addressed by Microsoft’s patches has already been published. You can learn much more about the patches in an advisory posted on Microsoft’s website.

Over on his blog, Chet has some interesting things to say about these latest patches – looking in greater detail at some of the vulnerabilities, and questioning whether Adobe could learn a thing or two from Microsoft when it comes to responding to flaws in their code. SophosLabs has also blogged about the vulnerabilities.

Whether you agree with Chet or not, one thing is clear – if you’re an affected Microsoft or Adobe user, you need to roll these patches out as a matter of priority.