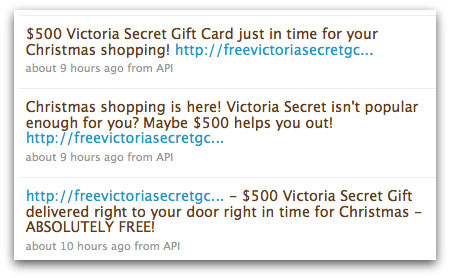 Some Twitter users have found that their accounts have been posting messages without their knowledge, apparently advertising gift cards for the glamorous Victoria’s Secret lingerie store.

The Twitter accounts sending the spam messages have no connection with the sexy underwear chain and many seem unlikely to be regular purchasers of its skimpy outfits (although some of the guys whose accounts are sending the messages might appreciate the catalogue containing its famous nubile models). Stop wasting your hard earned money at Victoria Secret when you get an get a $500 giftcard card now!

Don't you hate wasting all your money at Victoria Secret? $500 Gift Card now just for voting!

Presently if you follow the link you will arrive at a website which has no mention of Victoria’s Secret at all. Instead you will find yourself on a webpage featuring a video from a chap who describes himself as a “crazy internet multi-millionaire” who wants to show you how you can make money fast on the net. Hmm. If he really was an internet multi-millionaire I would expect his promotional video to have had higher production values. At least I don’t expect anyone to mistake him for a Victoria’s Secret spokesmodel.

If you have found your Twitter account has been sending spam like the above then you must change your Twitter password immediately, as you should consider your account compromised. Make sure not to use a dictionary password and instead choose a more complex password (watch this video to learn how). Furthermore, make sure you are using different passwords on your other online accounts (such as your email or PayPal).