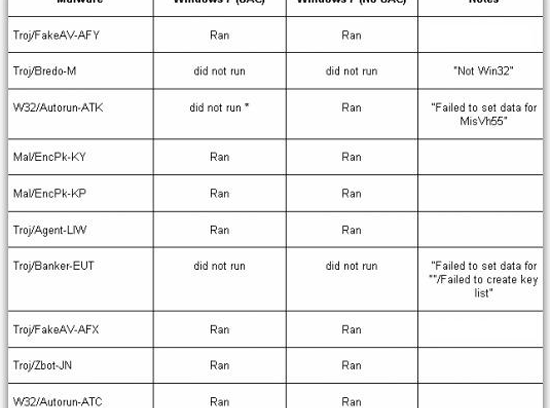 Now that we in the northern hemisphere have had some time to digest the Windows 7 hype and settle in for the coming winter, we thought we would get some more hard data regarding Windows 7 security.

On October 22nd, we settled in at SophosLabs and loaded a full release copy of Windows 7 on a clean machine. We configured it to follow the system defaults for User Account Control (UAC) and did not load any anti-virus software.

We grabbed the next 10 unique samples that arrived in the SophosLabs feed to see how well the newer, more secure version of Windows and UAC held up. Unfortunately, despite Microsoft’s claims, Windows 7 disappointed just like earlier versions of Windows. The good news is that, of the freshest 10 samples that arrived, 2 would not operate correctly under Windows 7. User Account Control did block one sample; however, its failure to block anything else just reinforces my warning prior to the Windows 7 launch that UAC’s default configuration is not effective at protecting a PC from modern malware.

Lesson learned? You still need to run anti-virus on Windows 7. Microsoft, in the Microsoft Security Intelligence Report released yesterday, stated that “The infection rate of Windows Vista SP1 was 61.9 percent less than that of Windows XP SP3.”

But let’s not get complacent. Microsoft seems to be saying that Vista is the least ugly baby in its family. You can be sure the next report will highlight its even less ugly younger sibling, Windows 7.

Why do I say this? As of October 31st www.netmarketshare.com states that Windows Vista has a 19% market share against Windows XP’s 70.5% and Windows 7’s 2%. Approximately 1 in 5 Windows users is using either Vista or Windows 7. These users often have newer computers, automatic patching, and firewalls and anti-virus software in place.

With millions of hosts still infected with Conficker, ZBot and Bredo, it is obvious a lot of unprotected machines are still out there, and it is no surprise that most of those are XP.

As the chart above shows, Windows 7 users need not feel left out. They can still participate in the ZBot botnet with a side of fake anti-virus. Windows 7 is no cure for the virus blues, so be sure to bring your protection when you boot up.