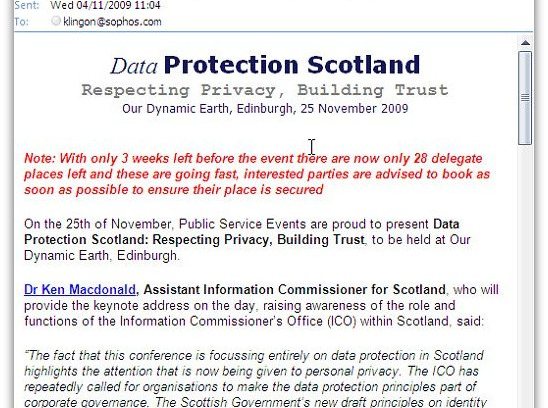 Today I received the following email promoting an event all about data protection and privacy that is going to be held in Scotland later this month.

One of the star speakers is the Assistant Information Comissioner for Scotland, Dr Ken Macdonald.

Do you notice anything at all odd about the email? Well, if you haven’t spotted yet let me make it clearer.

The email was sent to klingon@sophos.com.

That’s an email address we set up for anyone who has questions about the novelty Klingon Anti-Virus product we released earlier this year. (You might remember the amusing YMCA/Klingon mashup video we produced in its honour).

Is it possible that in their enthusiasm to invite as many people as possible to an event about data protection and privacy, someone has scooped up a whole load of email addresses from the internet and spammed them?

For what it’s worth, the website that the unsolicited emails links to appear to be legitimate and infection-free. The emails themselves don’t look particularly spammy, and my guess is that the unsubscribe link probably works. However, is it unsolicited? Yes. Is it commercial? Yes. And it’s definitely email. And it’s been sent to email addresses that *never* requested communications like this.

Emails like these aren’t in the same league as the hackers who spread malware via email, or the bad guys who promote dodgy online pharmacies – but it sure leaves a bad taste in the mouth that an organisation that is promoting data privacy and trust should be promoting its events in this manner.