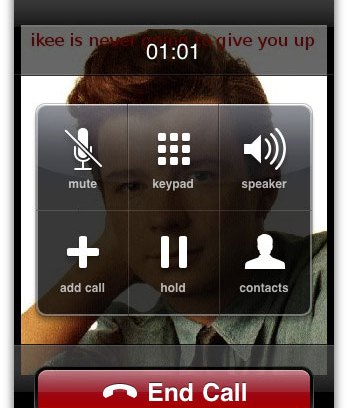 Apple iPhone owners in Australia have reported that their smartphones have been infected by a worm that has changed their wallpaper to an image of 1980s pop crooner Rick Astley.

The worm, which could have spread to other countries although we have no confirmed reports outside Australia, is capable of breaking into jailbroken iPhones if their owners have not changed the default password after installing SSH. Once in place, the worm appears to attempt to find other iPhones on the mobile phone network that are similarly vulnerable, and installs itself again

On each installation, the worm – written by a hacker calling themselves “ikex” – changes the lock background wallpaper to an image of Rick Astley with the message:

ikee is never going to give you up

What’s clear is that if you have jailbroken your iPhone or iPod Touch, and installed SSH, then you must always change your root user password to something different than the default, “alpine”. In fact, it would be a good idea if you didn’t use a dictionary word at all. SophosLabs is analysing the worm’s code, which suggests that at least four variants have been written so far. One of the attributes of the latest variant (labelled the “D” version) is that it tries to hide its presence by using a filepath suggestive of the Cydia application.

The source code is littered with comments from the author suggesting the worm has been written as an experiment. One of the comments berates affected users for not following instructions when installing SSH, because if they had changed the default password the worm would not have been able to infect them. Presently it appears that the worm does nothing more malicious than spread and change the infected user’s lock screen wallpaper. However, that doesn’t mean that attacks like this can be considered harmless.

Accessing someone else’s computing device and changing their data without permission is an offence in many countries – and just as with graffiti there is a cost involved in cleaning-up affected iPhones.

Other inquisitive hackers may also be tempted to experiment once they read about the world’s first iPhone worm. Furthermore, a more malicious hacker could take the code written by ikee and adapt it to have a more sinister payload.

iPhone users may rush into jailbreaking their iPhones in order to add functionality that Apple may have denied to them, but if they do so carelessly they may also risk their iPhone becoming the target of a hacker.

My prediction is that we may see more attacks like this in the future. Indeed, only last week we saw hacked iPhones in the Netherlands being held hostage for 5 Euros.

Who wrote the ikee iPhone worm?

The source code of the worm says at its start:

A quick trawl of the Whirlpool forum where users are reporting that their iPhones are unexpectedly displaying an image of Rick Astley, reveals a user calling themselves “ike_x”.

According to ike_x’s user profile on the Whirlpool forum his nearest city is Sydney, Australia . Further searching on the internet reveals other pages seemingly related to ike_x of Wollongong, New South Wales, using the name “Ash” or “Ashley Towns”. For instance, here is a MySpace page and this appears to be Ash/ikex on Twitter.

The worm’s author appears to have realised that people might be interested to learn why he wrote the worm, and posted this explanation inside the code:

Why?: Boredom, because i found it so stupid the fact that on my initial scan of my 3G optus range i found 27 hosts running SSH daemons, i could access 26 of them with root:alpine. Doesn't anyone RTFM anymore?

There is a certain irony in the notion that a hacker who says he was trying to expose sloppy security by the owners of jailbroken iPhones has done such a bad job of covering his own tracks..

Source of image of affected iPhone: Batman from the Whirlpool forums.