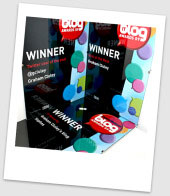 I’ve had a good night’s sleep, but I’m still feeling rather incredulous about what happened at last night’s Computer Weekly awards in London.

I feel honoured to have had so many people vote for this blog and my ramblings on Twitter.

I thought it would be a real achievement if I managed to be a runner-up in the “IT Security Blog of the Year” category, and was delighted to actually win it against such strong competition. (BTW, congratulations to Rik Ferguson who writes the CounterMeasures blog for Trend Micro, which was named “runner-up”. I met Rik for the first time last night, and was delighted to share the limelight with him). To win the Twitter award was even more astonishing – as I was up against such Twitter heavyweights as the BBC’s Rory Cellan-Jones, The Guardian’s Jack Schofield, Martha Lane-Fox of the Digital Inclusion Task Force, Bletchley Park campaigner Dr Sue Black, industry friends such as the guys from the McAfee and Symantec labs, and national treasure Stephen Fry. Rory actually jokingly tweeted later that he would be investigating whether I had hired a botnet to vote for me. 🙂

What can I say? Well, obviously I can say that “No, I didn’t use a botnet!”, but seriously.. I’m lost for words, and genuinely very touched to have had my blog recognised by the IT community. But lets not rest on our laurels – there’s malware to fight, spam campaigns to deflect, and celebrities to mock for choosing dodgy passwords. I’m really enormously grateful for the awards – but lets get on with the important job of raising awareness about computer security issues.

There are no doubt some new subscribers to the blog, and followers on Twitter. Welcome onboard chaps and chapesses. You’ve got a bit of catching-up to do and some bedtime reading, but we’ll soon have you fully onboard and protecting your business and home computers against the latest internet threats.

You can view full details of who won what on the Computer Weekly website, and there’s also more information in this blog entry by ComputerWeekly.com editor (and compere for the evening) James Garner.