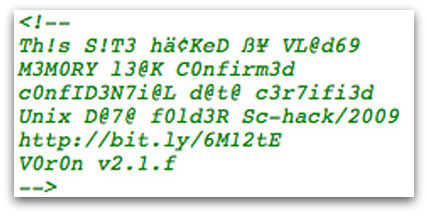 Tom Clancy’s Splinter Cell is a phenomenally popular series of video games where players stealthily creep up behind the bad guys and silently ermm.. “despatch them”.

The trick to succeed is stay in the shadows, sneak up on the enemy on tiptoe, causing distractions to waltz past them or quietly “neutralise” them as a threat.

The “stealth” aspect of the game actually makes it quite a diverting change from the often guns-all-blazing approach that many video games rely upon these days.

Funnily enough, it’s a similar approach that cybercriminals often use today. Rather than the attention-seeking viruses of yesteryear which announced their presence by displaying “amusing” messages or playing The Blue Danube through your speakers, most malware today is insidious – infecting your PC without making a big song-and-dance about the fact, and leaving no clue to the naked eye that your computer may have been compromised.

The same is true of infected webpages. Everyday we encounter over 23,000 new webpages infected by malware, most of which are legitimate websites which have been hacked. If you visited these webpages on an unprotected computer you risk becoming infected – but there is nothing visible on the screen to tell you that it has been tampered with, and a tiny pinprick of rogue code might have been hidden inside the site’s workings.

Today, Ubisoft, the publisher of the Splinter Cell video games, confirmed on its official Twitter page that the official Splinter Cell website had been compromised by hackers.

Visitors to the website are currently greeted by this message in Russian:

However, there are question marks as to whether this hack is real – or in fact a publicity stunt by Ubisoft.

A hidden message in the code of the main page reads: Visiting the bit.ly link referenced in the message takes users to a webpage uploaded by the hackers onto the Splinter Cell website, which displays the following ASCII art of a shield with a double-headed eagle: Ubisoft has not published any more information about the hack, or how it might have occurred. Indeed, it’s not possible to tell if this hack is real or a publicity stunt. Certainly it seems strange that as Ubisoft has been aware of the “hack” for some time, that they haven’t yet taken down the webpage.

If it is a publicity stunt it’s probably not the wisest that there has ever been – a hoax like this could panic users into believing there is a genuine security problem, and panic can lead internet users to make bad decisions.

But either way, it’s a timely reminder that even well-known companies can suffer at the hands of silent hackers. As always, be careful about believing everything you read on the internet.