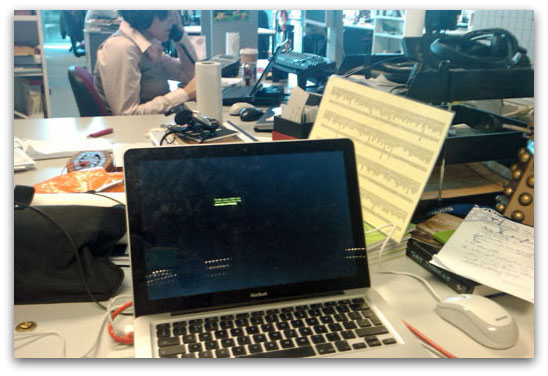 There has been a right royal ruckus over the so-called Black Screen of Death in the last few days.

Security firm Prevx kicked things off by warning that “millions” of Windows users could find themselves in front of a black screen, with fingers being pointed in the direction of Microsoft as possible culprits. The fighting talk caught the attention of the media, who wrote up the story.

I personally got calls from journalists asking me about the alleged problem with Microsoft’s updates that had “caused” a “Black Screen of Death” and all I could do was scratch my head and act baffled, as we hadn’t had any reports from customers ourselves.

Ultimately, Microsoft debunked Prevx’s claims, and Prevx apologised for any inconvenience they may have caused. It transpired that Microsoft’s November updates were not guilty after all.

"We apologise to Microsoft for any inconvenience our blog may have caused. This has been a challenging issue to identify."

The story didn’t end there though – some people wanted a punch-up, and a punch-up they would have!
Journalists have been taking pot-shots at rival journalists for writing about Prevx’s original blog entry in the first place, and thousands of blogs and comments have been written debating whether Prevx acted responsibly enough when making the initial announcement.

Meanwhile, our very own Paul Ducklin has pointed out that all the problem appears to be is a messed-up Registry entry.

But some people still aren’t satisfied. The reason? They haven’t seen their very own Black Screen of Death yet – in fact, no-one seems to have a picture of one.

Well, Clu-blog to the rescue. Here is a Black Screen of Death for you to look at. I’ve even made it available for download as a 1024×768 pixel Black Screen of Death wallpaper should you want it.

Look! I even managed to get a Black Screen of Death on my MacBook: Surely my Mac’s Black Screen of Death can’t be Microsoft’s fault? It’s possible. After all, I do have a Microsoft mouse plugged in to an Apple MacBook..

Joking aside, PrevX’s original blog post does seem to have been unfortunate. The claim that the problem could affect “millions” or Windows users was clearly far wide of the mark.

If there had been problem as widespread as PrevX’s initial headline suggested then we would have expected many reports popping up on the net.

Obviously Prevx’s alert has backfired on them, and I think they’ve shown good character in coming clean and apologising to the IT community and Microsoft specifically for any confusion that has occurred.

It’s always challenging to get the right balance between warning the public of a security threat and checking your facts to the “nth” degree. Clearly on this occasion, Prevx got it wrong – but we should judge them more by how they act since the incident rather than from their one slip-up. Everyone’s human – everyone can make a mistake.

Hopefully everyone can now move on to the more important and pressing real issues that face IT teams. But if you are feeling left out of the Black Screen of Death experience, please feel free to download the wallpaper.

Update: I’ve had a few people contact me saying that I’ve been far too kind to Prevx in my post above.

The truth is, I think they’ve been punished enough by the online community – and I don’t really feel like joining in on the beating. Some of the debate is getting rather ugly, and there are more important issues for the security community to be focusing on.