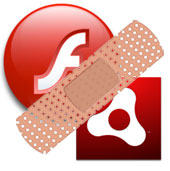 Adobe has published a security advisory announcing that it will be issuing a critical update to its Flash and Air products next week.

Details of the vulnerabilities, which will apply to Adobe Flash Player 10.0.32.18 and earlier, and Adobe AIR 1.5.2 and previous versions, have not yet been made public, but users are being advised to keep an eye on Adobe’s PSIRT blog for additional information.

It’s been a tough year security-wise for Adobe, as hackers have increasingly targeted the company’s products, hunting for vulnerabilities to exploit.

The reason why Adobe’s products (This is also true of Adobe Acrobat and Adobe Reader which handle PDF files) have captured the attention of cybercriminals is that they are so ubiquitous. It’s not an outrageous gamble for hackers to assume that you have some Adobe software on your computer, making it a potential avenue for attack.

And the attacks have been increasing in frequency – during 2009 it has seemed that we’ve never been that far away from another security headline announcing that a new critical vulnerability exploiting Flash or PDF files has been discovered.

In response to the growing threat, Adobe announced earlier this year that they would be following in Microsoft’s footsteps and issuing security updates on a predictable schedule.

So keep your eyes open next week for the Adobe patches, which are currently scheduled for 8th December.