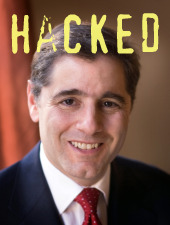 Julius Genachowski is just one of some 350 million Facebook users. The only things which singles him out for special attention is that he is also chairman of the Federal Communications Commission (FCC).

And so it makes headlines when in late December, Facebook friends of Julius Genachowski started to receive messages saying:

Adam got me started making money with this.

Of course, it wasn’t the chairman of the FCC who spammed out these messages. Instead, his account had been hacked by cybercriminals who used it to relay spam to other users of the social networking site.

It’s becoming more and more common for users of social networking sites to be targeted by hackers, eager to break into your account to blitz out irritating spam messages or malicious links.

Normally attacks like these occur because a user has not properly secured their computer with up-to-date anti-virus software (spyware can grab your password as you type it in), or a password for a social networking site is also being used on other websites, or the account’s owner has fallen for a phishing attack, or simply that an easy-to-guess dictionary word has been chosen to control access to an account.

Hopefully some good can come from high profile cases like the breach of the FCC Chairman’s Facebook page, and more people will learn to take better care of securing their personal computers and online life.