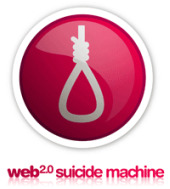 A website called the Web 2.0 Suicide Machine has been making headlines after it offered internet users a simple one-stop-shop for wiping their data off the likes of Facebook, MySpace, Twitter, or LinkedIn.

Although it may have been created with honourable intentions – after all, there is plenty of evidence that far too many people are sharing far too much data willy-nilly via social networks online – the Web 2.0 Suicide Machine website has stirred up some controversy after it was announced that it had been blocked by Facebook from accessing its systems.

Facebook, apparently, took exception to the way the service worked as they explained in a statement sent to journalists:

"Web 2.0 Suicide Machine collects login credentials and scrapes Facebook pages, which are violations of our Statement of Rights and Responsibilities."

I have to say I have some sympathy with Facebook’s position. If you really want to wipe some (or all) of your data off social networking sites then it would be much better if you did it yourself, rather than hand over your credentials to an unknown third party to do it for you.

I’m not suggesting that the creator of the Web 2.0 Suicide Machine is up to such shenanigans, but it wouldn’t take a criminal mastermind to build a website that offered this kind of service *and* attempted to use your username/password combination on a whole host of other websites.

Even if they didn’t abuse your password that way, the temptation to comandeer your account and post spam messages or malicious links to your social networking friends and buddies may prove too hard for some to resist.

Yes, the dangers are just too great. It’s much safer to clean-up the evidence you’ve left lying around the net about yourself by hand – rather than using a third party to sweep up after you.

Those of us of a certain age will remember the memorable theme tune to the TV comedy show M*A*S*H:

That suicide is painless
It brings on many changes
and I can take or leave it if I please. #

Just like the song says, you can take or leave sites like the Web 2.0 Suicide Machine as you please.

But my advice would be to stay well clear.