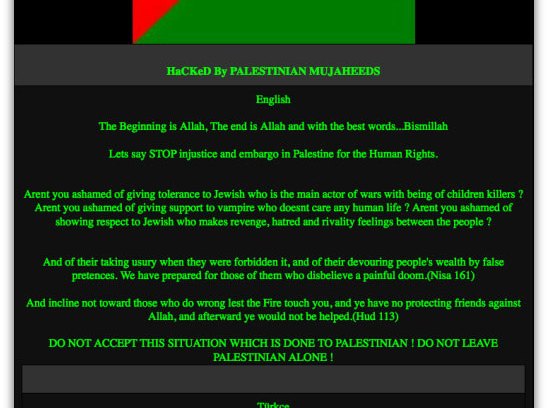 The website of the Jewish Chronicle newspaper, the world’s longest running Jewish newspaper, has been hacked by a group calling itself the “Palestinian Mujaheeds”, protesting against the continuing blockade of the Gaza Strip by Israel.

The hackers appear to have breached security of the London-based paper’s website (www.thejc.com), posting an image of the Palestinian flag alongside messages in English and Turkish. At the time of writing the JC’s website is unavailable, although a copy of the hacker’s message can still be found in Google’s cache: The Beginning is Allah, The end is Allah and with the best words...Bismillah

Lets say STOP injustice and embargo in Palestine for the Human Rights.

And of their taking usury when they were forbidden it, and of their devouring people's wealth by false pretences. We have prepared for those of them who disbelieve a painful doom.(Nisa 161)

And incline not toward those who do wrong lest the Fire touch you, and ye have no protecting friends against Allah, and afterward ye would not be helped.(Hud 113)

DO NOT ACCEPT THIS SITUATION WHICH IS DONE TO PALESTINIAN ! DO NOT LEAVE PALESTINIAN ALONE !

The page also attempts to play a 3.6MB MP3 file.

The same group appear to have also hacked a weather website at www.israelweather.co.il: Clearly hacktivists are only too happy to spread their political graffiti via unsecured websites, as they know it is likely to be seen by a large number of people. The pressure is on all website administrators to ensure that their sites are properly secured and do not have any cracks through which a determined hacker can break in.

Of course, this is not the first time we have seen pro-Palestinian cybercrime. For instance, in 2001 we encountered the Injustice worm (also known as VBS/Staple-A) which bombarded email addresses belonging to members of the Israeli government. Attached to the emails was a worm which displayed a message about a 12-year-old Palestinian child alleged to have been killed by Israeli soldiers.

More recently, we saw a US military website defaced with an image of a Palestinian protestor in front of an Israeli tank.