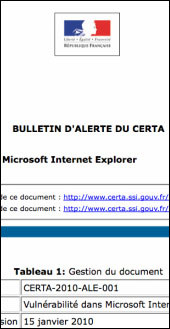 It looks like European countries might be falling over themselves to boost the uptake of Firefox, Safari, Chrome and other non-Microsoft internet browsers.

The French government has followed in the footsteps of its German counterparts by recommending that users stop using Internet Explorer, until a critical security vulnerability in the world’s most popular internet browser is fixed.

The vulnerability was exploited in the attacks against Google and other companies which have been dubbed “Operation Aurora” by security researchers.

The French government issued its advisory through CERTA (Centre d’Expertise Gouvernemental de RÃ©ponse et de Traitement des Attaques informatique), obviously concerned that businesses and government departments might be at risk from attacks similar to the ones that allegedly originated from inside China.

But do you think it’s a good idea to switch browsers to avoid the Microsoft vulnerability?

I would be interested in hearing your opinion as to what you think people should do in light of news of this (as yet unpatched) security hole.

So why not take a second or two to tell me your opinion in this quick online poll:

While the Internet Explorer security hole remains unpatched, should surfers use an alternative browser?(opinion)

Remember – if your IT department doesn’t already formally support an alternative browser, and if your users aren’t already familiar with the other browser, you may be causing more problems than it’s worth by summarily switching browsers.

You may also have web-based applications that don’t work well, or even at all, unless they are accessed with Internet Explorer. That’s not going to be good for productivity.

And finally, what if your replacement browser itself turns out to contain a vulnerability? Are you going to switch again?

My advice is to only switch from Internet Explorer if you really know what you are doing with the browser you’re swapping to. Otherwise it might be a case of “better the devil you know.”

My guess is that Microsoft will be working hard to release an out-of-band patch for the vulnerability. They will be keen to fix the serious security problem before more damage is done to Internet Explorer’s reputation.